{text}
Shipping and deliveryExchange & Returns Contact
store@gamisport.eu +420 725 698 888
Warehouse sale! JACKETS SHOES PANTS and OTHERS up to 60% off!

Gelanots is the brand name for a range of highly functional textile materials intended for outdoor clothes for the hardest weather conditions. These materials can very original way with the contradictory needs that are demanded from the functional:

2. it is necessary to prevent condensation in sweat clothes and subsequent hypothermia

3. When the rain water from the outside can not penetrate through the top layer of clothing 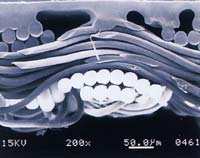 Tomen Corporation is a major Japanese textile company, a manufacturer of material GELANOTS and proprietor of the mark, and that is constantly working on its further development and improvement of functional properties. Its customers include a number of highly reputable manufacturers of sports and outdoor clothing for European and especially American market. Yet with the commercial brand GELANOTS you can meet only sporadically. Unlike other manufacturers of functional materials such as. GORE-TEX or Sympatex's business strategy Tomen Corporation completely different. It is in fact a production and development and concern for the brand keeps on their customers. Most of the big ones, therefore, used the opportunity to create your own image and its commercial name for this material and thus the exclusive right to use it. 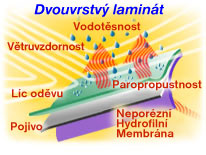 Secrets of high vapor permeability membranes Gelanots is hidden in the molecular structure of a special polyurethane (PUR), from which it is made. Among its molecules are relatively large gaps and the forces which they interact PUR molecule and water are optimum for this function. S exercise and a man sweat vapor concentration increases under his clothing. When the molecule vaporized sweat gets close Gelanots membrane is pulled between the PUR molecules and becomes a part temporarily. We call that the membrane is hydrophilic. Due to higher partial pressures of saturated steam within the apparel and the higher temperature on the inner side of the membrane is then continuously extruded water vapor through the membrane. It is a natural phenomenon as well as water flowing from a higher place to lower place.

There is an interesting feature for which the Gelanots called "smart membrane". Intensive movement is not only more sweat, but also increases body temperature. Due to the higher temperature PUR molecules move faster, the distance between them increasing, and the ability to transmit vapor increases proportionately.

If it increases further the intensity of physical activity or decreases when the outside temperature, evaporated sweat on the inside of the membrane begins to condense - inside the membrane becomes damp. Here breathable function in classic membranes such as PTFE ends - if you sweat condensed to form a continuous film, cease altogether breathe. But not Gelanots. Its hydrophilic function can now also to pull the molecules of condensed water in its structure and exude on the outer side of the garment.

The limit happens when it rains, when all the outside of the garment is covered by water. PTFE membrane has now embedded pores and the permeability is zero. In Gelanots partial pressures of water vapor have also do nothing, because the relative humidity on both sides of the membrane is 100%. But what keeps performing temperature difference. PUR molecules on the interior (warm) side of the membrane move faster, there arise more intermolecular spacing and transport par still (albeit limited) progress.

If we want to compare the permeability of various membranes, we set it in grams of water vapor that passes through one square meter area per 24 hours. Measurements are motorcycleried out internationally recognized testing authority under laboratory conditions precisely defined according to ISO. Only the results thus obtained can be regarded as an objective and authoritative. For membrane GELANOTS XP manufacturer guarantees the value of at least 20 000 g / m2.24hod.

Another development is by reducing the resistance to the flow of steam with a binder (glue), which membrane is laminated to the fabric. Recent results suggest that soon we will see even guaranteed values ​​over 35 000 g / m2. 24.hod.

The degree of waterproofness of the membrane is determined by the test of resistance to water pressure. During this test prescribed manner gradually increasing the pressure below the membrane and the value is recorded at which the first passed through the membrane droplets. The water pressure is usually converted into the height of the water column that would cause such pressure and is expressed in millimeters.

Conventional porous membrane such as PTFE, while still achieving certain values ​​for waterproofness. Due to wear, bending, stretching or unsuitable washing (twisting) the pores in burdened areas expand, waterproof and gradually decreases over time can lead to promokání exposed areas such as the arms under backpack straps, elbows and knees from inside and outside, with bends boots etc. The non-porous structure of the membrane Gelanots is therefore a great advantage here. Gelanots is compact and very flexible due to the stretching during normal use there is no risk of any damage to the membrane, which would have the effect of reducing pressure resistance.

The manufacturer guarantees that GELANOTS XP retains pressure of at least 20,000 mm water column and this figure will pay almost unchanged even after years of use.

Is the name for a unique product of Tomen - a non-porous hydrophilic membrane. Because of its capabilities is used for producing textile materials for sportswear (usually is laminated on the reverse side of the fabric).

Membranes in functional sportswear generally ensures that evaporated sweat can pass through the membrane and out of the outer moisture penetrates inside - simply put - that their sweating user "nezapařil" and so not getting wet in the rain.

As an example, traditional clothing membrane include materials known under the trade name GORE-TEX, whose principle function is basically simple: in this membrane material of polytetrafluoroethylene (PTFE) are microscopic pores which are much larger than a single molecule of water (water vapor) and yet much smaller than the smallest water droplets. The water vapor therefore passes through the micropores, but liquid water is not.

Gelanots XP membrane from the classical microporous membranes differ fundamentally: it is non-porous (no pores) and yet its excellent permeability. Its development is very fast, now reaches peak values ​​microporous membrane and at the same time, thanks to its neporéznosti, have their drawbacks.

Subscribe to our weekly newsletter filled with special discounts and premium deals!

To keep Gamisport as you know it (cookie consent)

We want to guarantee you the best possible shopping experience, remember what's in your shopping cart and your favourite products without having to log in every time, and find what you're looking for quickly on our site, saving you a lot of clicking.

Therefore, we need your consent to process cookies, i.e. small files that are temporarily stored on your browser. Thank you for providing this consent and helping us to improve the website. We will treat your data with respect.

Your product has been added into your cart